For the first time, a South American winery has been awarded as the best winery in the world. Discover the journey of 4 generations of passionate viners.

A family with a passion.

Hence comes the birth of a wine dynasty - Bodega Catena Zapata. From 19th - century Italy and California's sunbaked valleys to the Andean foothills of Mendoza and Bordeaux's lush vineyards, the history of Catena Zapata spans across 100 years during which wine innovators put their hearts and souls into refining the flavors of local grapevines.

Now a new chapter of the winery begins with Laura Catena, the Catena family's fourth-generation vintner. When she began to take over the family business, the world still looked down on the wines of Argentina.

Can science help this determined heiress resurrect the reputation of Argentine wines and let them shine on the global stage?

1. Up in the Andes: the origins of Catena Zapata

The name Malbec popped up. What immediately comes to one's mind was the charmless red bottle present in every by-the-glass happy hour menu. Or worse, a grape smoothie that tasted like alcoholic liquid. This is the problem when a grape variety becomes overly popular: mass production immediately butchers its taste. Such was the situation of the Argentine wine scene before Catena Zapata: like the Malbec, many of its wine lines struggled with sales. Unimpressive flavors did not sit well with the connoisseurs' sophisticated palates, and for decades the negative impression of Argentine bottles has hindered the growth of the local wine industry.

With the turn of the twentieth century came winery technology, vineyard investment, and terroir research, which altogether advanced Argentina's status as a producer of fine wine. Between the rocks and clays that frame the Mendoza's vineyards, Argentina has found its true character. Much of this happened thanks to Catena Zapata , a family-owned winery nestled in Mendoza, the sub-appellation of Agrelo, Argentina. 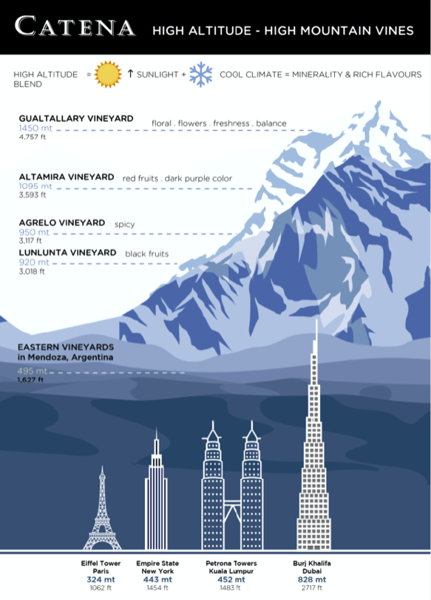 Founded in 1902 by an Italian immigrant named Nicola Catena, Catena Zapata has utilized European winemaking techniques to improve the local wine's quality. The Catena family has returned to the jagged Andes and its scrub-laden Mendoza, a land full of steep slopes, volcanic gravels and gray-colored rocks the size of softballs. By focusing on Mendoza's terroir over the course of 50 years, they have unlocked the secrets of the limestone soil and developed their business into one of the global wine leaders.

Currently owned by Nicolás Catena and his daughter Laura Catena, the winery continues its quest of revolutionizing the alcoholic beverage industry in Argentina - with an eye towards the future of wine science.

2. The family: a story of wine and tradition

The history of the Catena family dates back to the nineteenth century when Nicola Catena sailed from Italy to Mendoza, the central west of Argentina. In 1898, he left behind his impoverished hometown to move to a land of prosperity and opportunity. Amidst the snow-capped hills and gin-clear air of Mendoza, he believed he had found his true calling. In 1902, Nicola formed his first Malbec vineyard in Mendoza. Nicola's hunch that the Malbec variety would find its hidden splendor in the Andes did not fully yield fruits until nearly a century later. But when it did, it did beautifully.

While Nicola was the start of it all, his grandson Nicolás Catena Zapata played a no less crucial role in the growth of the family's winery. Nicolás was a quiet, yet persistent visionary. When it was his turn to take the reins of the family business, he realized how desperately he was waiting for a breakthrough. 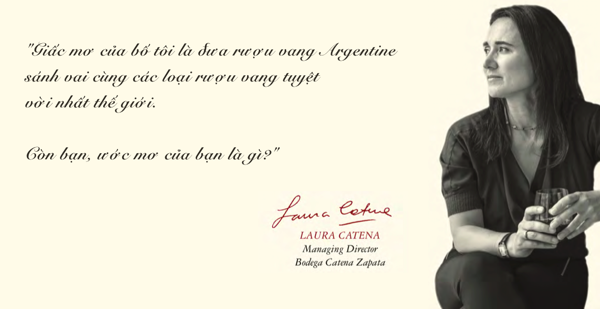 In the early 1980s, the French dominated the wine market. No one in the world dared to challenge them on the wine front, except for the Californians, whose Cabernet Sauvignon and Chardonnay could put even the best French wines to shame. Nicolás's story then took a detour when he decided to visit the sun-soaked Napa Valley and study its abundant vineyards. Upon returning to Mendoza, he immediately applied Californian winemaking techniques in the production of Argentine wine. Yet something was missing. It was not until Nicolás paid more attention to the alluvial soil of Argentina did he reach an epiphany. In the end, everything comes down to the dirt. After learning about the uniqueness of Mendoza's geology and sunlight, Nicolás pioneered the movement towards higher-altitude vineyards in the 1980s and 1990s. Argentine wine, he claimed, could only achieve grace and finesse if produced in cooler conditions.

Today Laura Catena, the fourth-generation vintner of the Catena family, runs the family business. At first, this decision was not easy for her. Graduated from Harvard College in 1988 and Stanford Medical School four years later, Laura worked as a doctor in one of the most prestigious hospitals in the US and had no intention of inheriting her father's wine empire.

An incident has changed her mind for good. In 1995, when Catena Zapata was invited to participate in the New York Wine Experience, Nicolás asked Laura to come and represent the business. The way the crowd treated her father's wine made Laura furious. “I watched long lines at the French and Italian producers' tables,” says Catena. “I got one person every 10 minutes. Some just came up to spit in my bucket. My father was king in Argentina, but outside, they didn't even know the country makes wine. I called my dad and said, 'I'm going to have to come to help you.' ”

With her background in the sciences, Laura set on a quest to hunt for whatever varied gold hidden along the Andean slopes. She promoted a pragmatic methodology and insisted on using experiments and data to make informed decisions. This empirical and fact-based approach led Laura to establish the Catena Institute, a research and development arm paying close attention to the Adrianna Vineyard. Nowadays, with research on Adrianna's climatology, biology, and geology, the Catena Institute of Wine works to ensure that Argentine wines can stand alongside the very best. Through academic partnerships with the University of California Davis and Universidad Nacional de Cuyo, the facility further seeks to spread detailed knowledge to the wine community.

Under the leadership of the Argentine heiress, Catena Zapata began to get more and more positive reviews. The winery's scores from critics have gone through the roof, to the point that the winery not only tops the Argentine rankings but also dominates the European market. As the most visible member of her prominent family in a still-emerging region, Laura Catena is not just an ambassador for Bodega Catena Zapata; she's an ambassador for Argentina as a whole. And at 51 years old, she still has no intention of slowing down. To her, there is always gold in the vineyards.

3. The wines - Argentine's and the world's finest 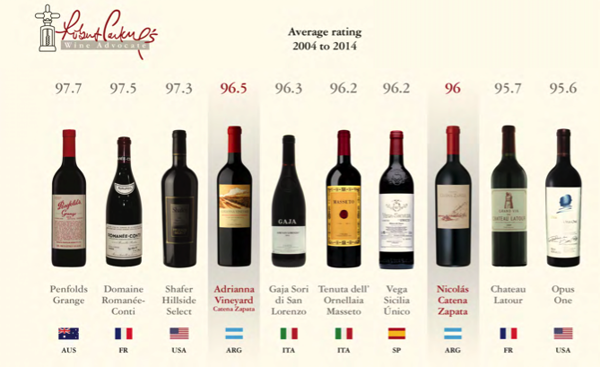 Catena Zapata has set a new standard for quality in South America and the world. Made from 100% estate-grown fruit from the Catena family's high-altitude vineyards, its wine selection a classic blend between strong aromas and fruity notes. The wines bring together single varietals from different locations within the Catenas' vineyard sites. This means that the final product gets the best from each vineyard, which adds a layer of complexity to the final wine.

Like the coffee beans of Vietnam's Central Highlands, the historic vines of Catena Zapata will always bear the rich complexity of their soils, a quality further refined by the winery's state-of-the-art viticulture. The wines quickly demonstrated the quality potentials of Argentina and garnered remarkable reviews from worldwide media. Paving the way in Argentine winemaking, these Catenas' bottles have left their footprints on both local and global maps.

Don’t have the time to read everything? Here’s a summary for you:

It is a rule that nature’s best fruits make the best wines. The history of Catena Zapata began in 1902 when Nicola Catena left his Italian hometown and arrived in the desert landscapes of Mendoza, Argentina. Amidst the barren slopes of the Andes, he discovered a potential terroir for winemaking, an inheritance that he would pass down to his son and grandchildren.
Three generations later, the land is still managed by the same passionate family, who has turned its potent, full-flavored grapes into top-notch Malbec bottles.
With the hope to elevate the Argentine wine scene, the grandson Nicolás Catena Zapata decided to learn from the best in the world. Frequent travels to the sunbaked Napa Valleys and the hub of wine-making Bordeaux equipped him with new methods of production. He also advocated for a high-altitude wine revolution, growing vines where no one thought they would ripen – at almost 5,000 feet elevation. These two nuanced approaches led to the discovery of the Adrianna Vineyard, a site used extensively by the Catena family today.
In the 90s, Nicolás’ daughter joined him in the family business. The fourth-generation vintner Laura Catena took on the role of an innovator, using empirical knowledge and research to improve the local wines’ quality. With the help of fellow scientists in the Catena Institute of Wine, she went to great lengths to study the soil composition, humidity, and acidity of the Adrianna Vineyard. The combination of limestone soils and high-altitude climate lends the Catenas’ wines an incomparable freshness and delicate notes of flower that separate them from other global lines.
Thanks to Laura’s leadership and her family’s ongoing innovations throughout 100 years, Catena Zapata has reached the summits. Now a top winery in the world, it continues to honor Argentine wines by topping the charts of Decanter, Parker, and Drinks International.

Want to know more about Catena Zapata and their wine collection? Check out the website:

Or browse now for the largest online selection of red and white wines from Catena Zapata in Vietnam: Vietnam-cellar.com